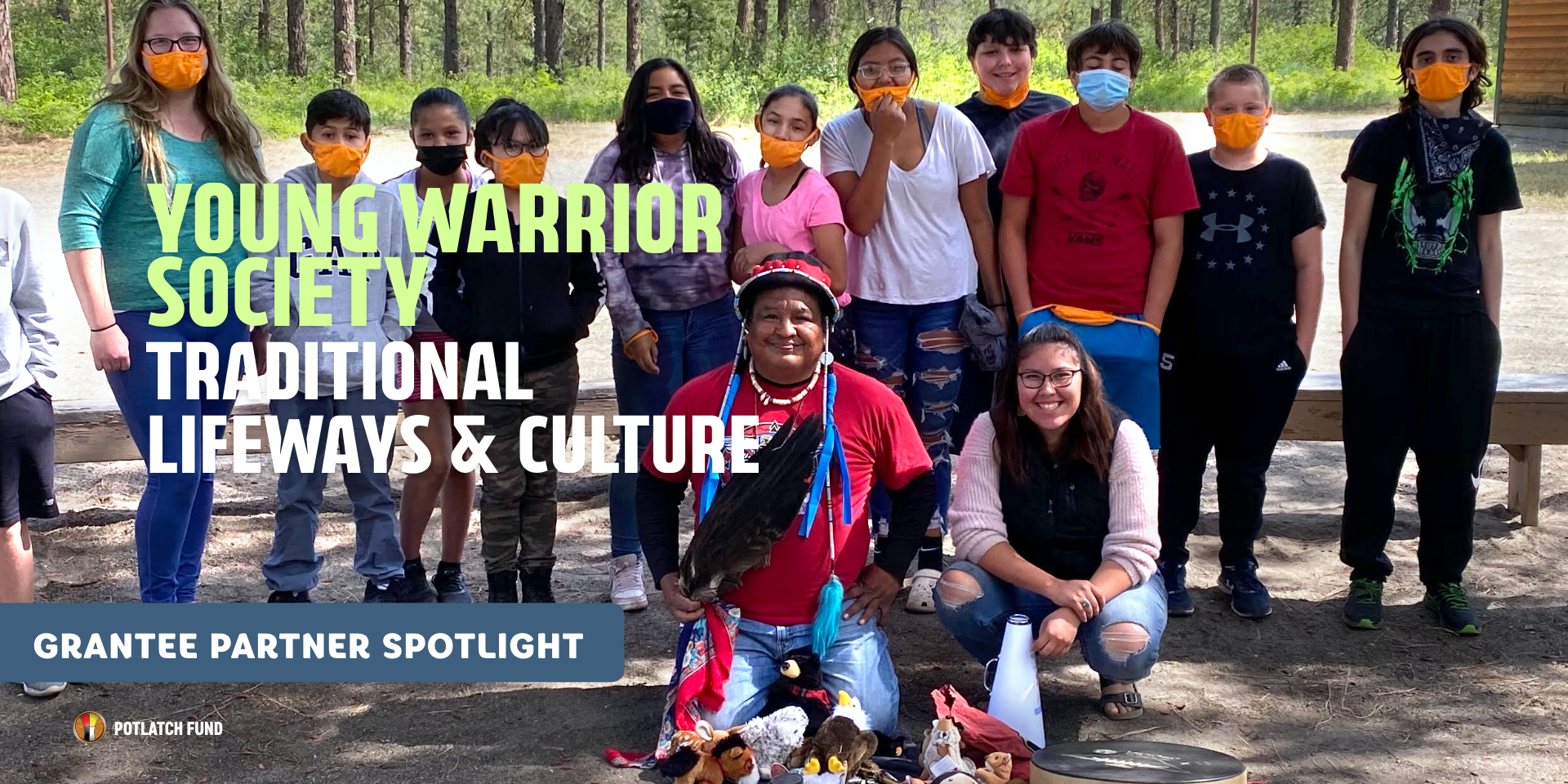 It was going to be a year of program expansion, of dreams coming to fruition, of increasing visibility in the community and beyond. A worldwide pandemic had other plans.

Since 2018, Tem Xwu lough First Food and Families—located on the Colville Indian Reservation, in the town of Nespelem, Wash.—has been building connections and conducting education workshops in the community in order to pass critical cultural knowledge and skills to the next generation. One of its programs, the Young Warrior Society, regularly attracted youth from all over North Central Washington to its programs and activities, as well as up to 40 volunteers.

At the center of activities for the organization were land-based cultural education and sovereignty camps, where 60 to 100 youth learned from adults and elders the lifeways and skills that had sustained their ancestors for thousands of years. Topics ranged from harvesting and preparing wild game and traditional plant foods to acquiring important survival skills to participating in traditional ceremonies, and more.

The camps grew so much in popularity and reputation that by 2019, they attracted the attention of an Australian film crew as well as additional local partners and volunteers from across the United States. That year, members of the Young Warrior Society also planted a garden and shared the resulting bounty with community members and the local food bank. They also increased their online presence, with videos of the land camps generating more than 25,000 views on social media.

Dan Nanamkin is the director of the Young Warrior Society. Nanamkin is a well-known educator, speaker, and all-around advocate for Indigenous cultural education. “We follow in our ancestors’ footsteps through the seasons,” Nanamkin says, “which means we change through the year our food systems and rites of passage that we follow and maintain to this day, and we strive to achieve this education in our youth.

“Unfortunately, a lot of our cultural education is not provided in schools,” Nanamkin says, which is a big part of the motivation behind the goal of the land camps “to share with youth in our communities our cultural values and way of life and create a bridge between our elders and our youth and our people.”

Pre-COVID plans for 2020 included extending that education even further by offering additional land camps, four in all, to follow the rhythms of the seasons. They held a winter storytelling and survival camp, but then COVID intervened.

“And we didn’t really know what to do,” Nanamkin says. “Like everyone else, we were pretty frightened, you know, and our tribe had pretty strict regulations preventing outside people from coming onto the reservation and strict protocols on people who could gather.”

Like many groups, Nanamkin says the Young Warrior Society members adapted and changed course due to the pandemic. For one thing, they turned to traditional wisdom gleaned from decades of fighting plagues that decimated Native populations in the 1800s and decided to learn about plant medicines and how to gather, grow and use them to provide care to those in their community sick with COVID.

“So we were able to bring them food and medicines, and as of this week, our entire reservation finally has zero cases all across the board,” Nanamkin says.

Young Warrior Society participants also found other safe ways to be of service to their community. They doubled the size of their garden to grow even more food. They accompanied elders to appointments and into the mountains to help them gather seasonal berries and plants. They chopped wood for their neighbors. They started a podcast to bring inspiration and education to community members to help them cope with the grief and loss brought on by the pandemic and its many losses. They stood in the snow and sang to elders isolated and behind glass inside a convalescent home. They joined winter search parties for children and young men who went missing.

And then there were the fires. “It was really devastating, the damage that was caused on both sides of our reservation,” Nanamkin says. Among other things, volunteers helped to drive food and medicines from one side to the other of the 1.4 million acre reservation to support firefighting efforts.

“So yeah, we kept very busy,” Nanamkin says, “and this year’s going to be even busier. But you know, this is what we’re about. We love to help and learn, and we want to expand.”

With help from Potlatch Fund’s Resiliency Fund, the Young Warriors Society and Nanamkin plan to move forward into the coming year cautiously with small gatherings including talking circles, sweats, movie nights, and opportunities to sing and dance. “We still want to provide safety,” Nanamkin says. “A lot of people still have worries and fear and grief, and they never dealt with it. And we’ve never been able to congregate, and now we’re finally able to a little bit.”

Other plans include convening small groups to learn about gathering—and hunting and fishing for—traditional foods, including the plants needed for medicines. Nanamkin is planning a series of cultural resiliency classes to spread the knowledge, he says, “as many homes have been without these foods, medicines and teachings since COVID struck our area hard last year.”

In addition, because fires on the reservation cause many residents to lose electricity for periods of time, the group recently hosted a hands-on food preservation class about how to can and preserve traditional natural foods including salmon and berries. The class was attended by all ages.

With no adult nutrition or diabetes prevention programs available in the community, and the complete absence of any organic food at tribal stores, Nanamkin says the group will also keep promoting healthy, organic foods by giving away the food they grow in their garden.

Recently Konbit, an organization working to enable food sovereignty and equity around the globe, began constructing a state-of-the-art greenhouse in the White Buffalo Meadows Housing Development in Nespelem which will allow Young Warriors Society members to grow food and plant medicines year-round for the first time, blending traditional food production with new technologies and moving the community closer to food sovereignty and long-term sustainability.

Nanamkin, who will serve in an advisory role for the greenhouse, looks forward to using it as an educational tool as well, and he wants it to be accessible to elders in the community along with the youth.

“We have very few elders that are left who know traditional wisdom and knowledge,” Nanamkin says. “And so right now it is very vital that we create this little circle that bridges to the youth in our schools, to our boys and girls clubs and our community.”

Whatever the year ahead brings, the Young Warrior Society will keep serving its community and building bridges across generations in order to build resilience and hope for the future.

“We just have a love for people. We have a love for culture,” Nanamkin says. “Our culture provided the medicines in food and the teachings and the prayers, the spiritual foundation, that have gotten us through this time.”

Shortly after Potlatch Fund interviewed Dan Nanamkin for this article, the Chuweah Creek Fire broke out on the Colville Indian Reservation, threatening the town of Nespelem, forcing mass evacuations, and destroying homes.

“The fire almost burnt us down, but we fought it ‘til the end,” Nanamkin told us via email. “Our valley is still super smoky, which has caused very bad air quality. Along with record heat and drought, our crops are failing.”

By the time the Chuweah Creek Fire was 95% contained, the Whitmore Fire was again threatening the town—and had already burned more than 56,000 acres while only 25% contained. Nanamkin let us know that his group hasn’t slowed down their support of the community or the firefighters, and that they’ve joined with other warrior society groups to deliver more than 50 tons of food and supplies so far, including herbal lung medicines, to those affected by and fighting the fires.

The group also hosted an event to honor firefighters with pow wow dancing, drumming, food, and recognition of those who came to help, and Young Warrior Society members provided prayer ceremonies for the firefighters.