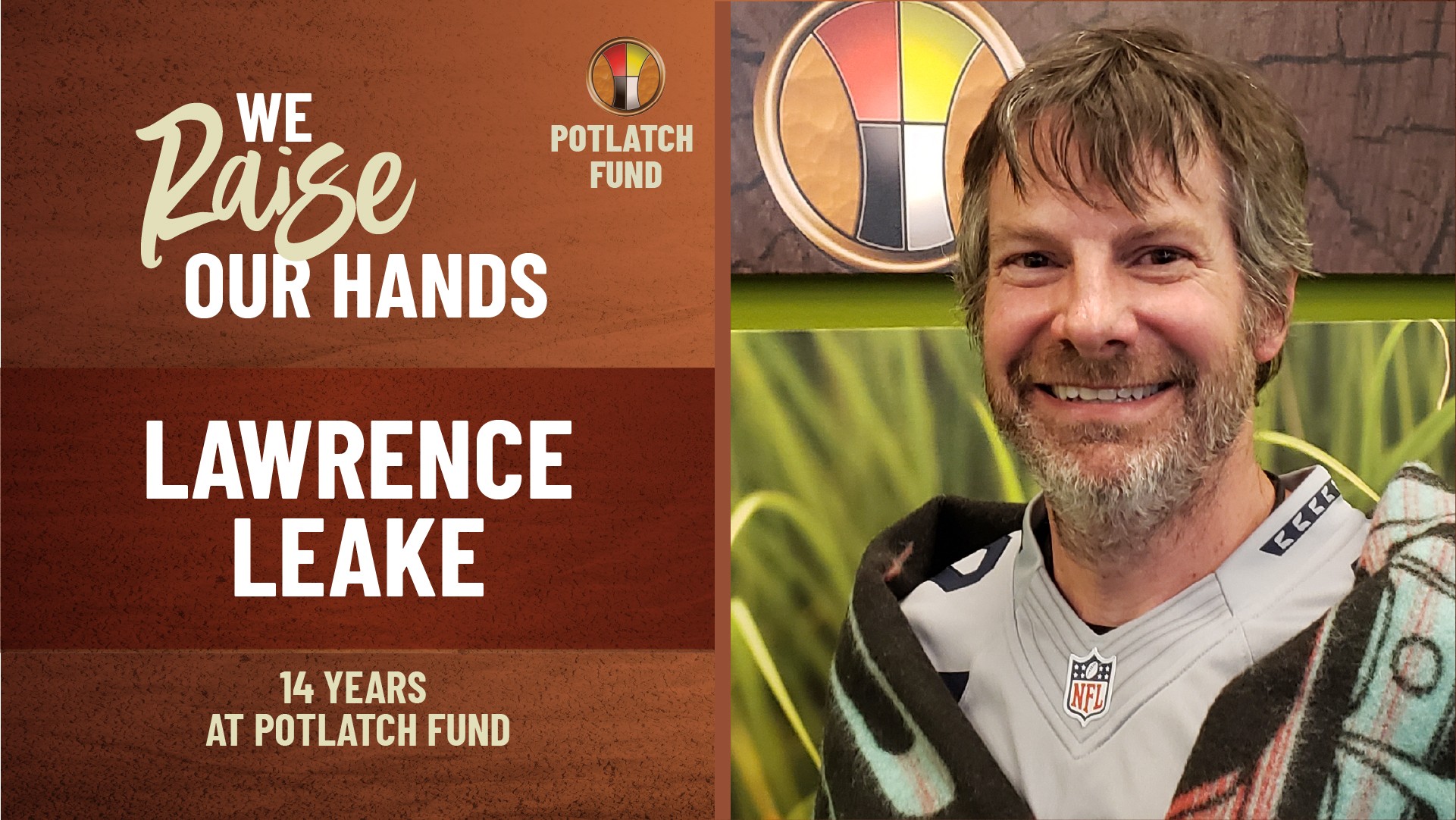 Lawrence Leake – A Tribute to His Service

Recently, Potlatch Fund honored one of its longtime employees with a blanketing ceremony to acknowledge his many contributions and to wish him well as he moves on to many more great endeavors. We wrap him in our love and appreciation for his work in our Native Community. This is not goodbye, Lawrence is a part of our community and we look forward to appreciating his success ahead.

After serving Potlatch Fund for more than 14 years, Lawrence Leake will join the development team at the Museum of History and Industry.

During his time with Potlatch Fund, Lawrence wore many hats, most recently as the organization’s managing director. His first position with the organization was as an executive assistant to Andrea Alexander, a job he found because he was looking one day through a list of Seattle-based nonprofits, and came across the word “potlatch.”

“And having been born and raised here, I was familiar with at least the basic understanding of what potlatch is,” Lawrence says. “And it was just so different from hearing someone’s name or a family name on the foundation.”

At the time he was hired, Lawrence had no direct experience working in the nonprofit world. He’d recently moved back to the Seattle area from Japan, where he’d been living for 10 years with his family and running a language school in the small town where they lived.

Upon his return to Seattle, well-meaning friends and acquaintances started making the usual suggestions for job possibilities, steering him toward homegrown companies like Amazon, Costco, and Microsoft.

“Those just didn’t resonate with me,” says Lawrence. At the same time, he was learning more about philanthropy and nonprofits, which seemed to him like a natural extension of his own upbringing and education.

“There’s a history of educators, and doctors and nurses in our family going back. So I think the idea of contributing at a different level to society has always been there,” he says.

Almost immediately upon starting his new job, he was tasked with retrieving and logging the mail. At the time, Potlatch Fund had two grant cycles, for community building and Native arts. Since Lawrence started working the same month applications were due, he began to collect them.

It wasn’t long before he learned how to make sure the grant applications were complete. “I kind of learned on the job the whole grantmaking process,” he says. “I think that year in 2006, Potlatch Fund expended maybe $115,000 in grants and now, by the end of June this year, Potlatch Fund will have invested over $5.5 million in Native-controlled initiatives.

“I can’t take any credit for that,” Lawrence says. “I have written grants that have raised money, but the work is being done by community members and the tribes and tribal departments and artists.

“But it’s been so much fun to see that program grow year over year, and to see the pictures that come in with the final reports,” he adds.

Another aspect of his work Lawrence found particularly enjoyable was working on the annual gala over the years. “It was just so much fun working on so many unrelated aspects—the sponsorships, the entertainment, working with the venue, getting the guest list, procuring silent auction items—and then to have everything come together on a set day at a set time, for about four hours…..it was really for me a great evening, always.”

It was also a family affair. Lawrence says his children would spend hours helping him prepare for each event, sorting bags and boxes for each of the tables, sometimes while watching a movie together. “They really enjoyed the silent auction,” he says. “I don’t think we ever went home empty handed. And I really saw it as a celebration of the community. It was always just a magical event.”

Community is a theme Lawrence returns to several times when talking about his time at Potlatch Fund. Whether it was getting to greet returning guests year after year at the annual gala, or driving visitors to the final landings for the canoe journeys, he says he always felt humbled by how he and other non-Natives were welcomed by the Native community.

“The work is very dear to me. I feel privileged to have been part of Potlatch Fund and part of Northwest Indian country for 14 years. It will never leave who I am. The spirit of community is ingrained in me. And I think that’s a very positive attribute I will be leaving Potlatch Fund with,” Lawrence says.

It’s also something he hopes to bring to his new position at MOHAI.  “I’m just very excited to take the things I’ve learned to a new position. I don’t know if there’s a way to bring community into MOHAI in a more meaningful way, but if there is, I will definitely do what I can.”

Talking to those who worked with him highlights the value of his contributions to Potlatch Fund over the years.

“In working with Lawrence, I always appreciated his quality of work. It was always above and beyond my expectations,” says Potlatch Fund Executive Director Cleora Hill-Scott. “In his work, his support of Native communities showed up in many ways. He’s definitely an ally.”

Meredith Parker—on the Board of Directors since 2007 in various capacities and its current compliance officer—has worked with Lawrence almost from the beginning. She mentions his ability to excel at the various roles he filled during his time with the organization. “Lawrence has been able to do that because he’s very knowledgeable and nimble, and he learns quickly. He’s been able to work at all different levels with all different people. Recently, his relationships with people on behalf of Potlatch Fund has given them confidence in the organization. He’s been able to hold those relationships carefully and nurture them over the years,” she says.

She recalls Lawrence’s organization of the annual gala as “so on point” that it was scheduled to the minute, something she says showed his respect for everyone’s time. “He’s so mindful and thoughtful and considerate of all aspects of Potlatch Fund.”

“He was just overall excellent in everything he did for Potlatch Fund,” she adds. “His contribution is going to be missed.”